On our journey in the states of the western United States, we will see and experience lots of views, all well known from countless American movies. We drive through landscapes that have been venues for several wild western movies: the Nevada desert, the Grand Canyon, the Sierra Nevada, Yosemite National Park, and the nature experiences become something completely out of the ordinary. The cities of Los Angeles, San Francisco and Las Vegas are among the most filmed in the world. We will of course walk along LA’s Hall of Fame and those who so wish can make their own extra excursion to one of Hollywood’s major film studios, Universal Studio. Additional film-related visits include Alcatraz, the Golden Gate Bridge and Fisherman’s Wharf in San Francisco, King Randolph Hearst’s Hearst Castle and a trip along the Pacific Coast Highway. In Las Vegas, we are dazzled by The Strip’s colossal neon advertising and, in contrast, experience the barren desolation of the Mojave Desert. In addition, having the opportunity to shop for American branded goods at extremely favorable prices gives this trip another dimension. Magnificent nature, skyscrapers and other famous buildings, film and entertainment, trade and commerce, all that we associate with the United States we get on this journey! 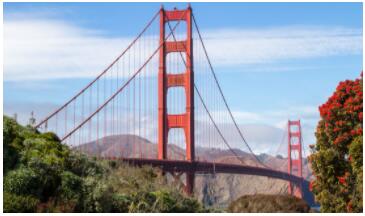 Day 1: Travel to the United States (San Francisco)
We fly to San Francisco. Meals are included on board the long-haul flight. After checking in at our hotel, it will be possible to rest for a while or maybe wander around on your own and get some impressions of this beautiful city. Overnight in San Francisco.

Day 2: San Francisco – Hearst Castle – San Luis Obispo
After breakfast we take a bus to Hearst Castle. This is probably the only real castle on American soil. The background story is exciting: the great newspaper magnate Randolph Hearst had seen several classic European castles on a tour of Europe in his youth. After becoming a multimillionaire in his media business, he had the architect Julia Morgan design this magnificent castle with more than 160 rooms. It was built between 1919 and 1947. Virtually all the big movie stars from Hollywood have been guests here. Hearst used parts of his wealth to build an incomparable collection of art and antiques. These are now available for viewing in several of the rooms. The swimming pool is also quite exceptional. The Castle and Randolph Hearst have also been immortalized through the 1951 film Citizen Kane, Orson Welles’ masterpiece. repeatedly voted the world’s foremost, we get to follow Randolph Hearst’s life, and Hearst Castle is the model for the film’s Xanadu. (It is very advisable to watch this movie before the trip!). After the castle visit we go to San Luis Obispo. It is one of California’s oldest cities, and dates back to the 18th century, which is not to say little in the United States. It was also the last city in the United States to use street lamps with gas. Overnight in San Luis Obispo.

Day 3: San Luis Obispo – Solvang- Santa Barbara – Los Angeles
Today we start early and steer the cow towards the city of Solvang. This place was founded in 1911 by a group of Danes who on their way west wanted to found a Danish colony. Even today we see many houses in a traditional Danish design. From Solvang we continue along the Pacific Coast Highway towards Santa Barbara and enjoy the beautiful scenery that spreads before our eyes. Santa Barbara, also known as the ‘Riviera of America’, is perhaps the best and most beautiful beach resort in Southern California. We arrive in Los Angeles in the afternoon and then the rest of the day is free for our own activities. Overnight in Los Angeles.

Day 4: Los Angeles
In the morning we take a walk along the famous Walk of Fame. Here we can see the names of all the world’s big movie stars engraved in just stars on the sidewalk. We also look into Mann’s Chinese Theater, the world-famous cinema from 1927 located on Hollywood Boulevard. As an option, it is now possible to visit one of Hollywood’s most famous film studios. Here in the heart of Hollywood, we get to wander around Universal Studio City, a huge area with as many as 48 recording studios. Universal is the world’s largest film and TV producer. During the tour we get to experience lots of exciting special effects, avalanches that break bridges, terrible storms, white giant sharks, King Kong and much more. Overnight in Los Angeles.

Day 5: Los Angeles – Outlet Factory – Las Vegas
We are now leaving the coast and Los Angeles. The journey goes through the San Bernardino area and on mountain roads we reach the state of Nevada and the Mojave Desert. Along the way we stop in Barstow where the Tanger Outlet Center is located. In this famous outlet we can buy many of the most famous branded clothes at incredibly low prices. In addition, the dollar exchange rate is currently to our advantage. We arrive in Las Vegas, ‘the world’s entertainment and entertainment capital’. The afternoon is free at your own disposal. Later in the evening, of course, it’s time to experience the night’s Las Vegas with all the flashing neon signs. Here you can see some of the famous shows, such as Fremont Street Viva Vision, Fountain Show at Bellagio or Mardi Gras at Rio. Overnight in Las Vegas.

Day 7: Las Vegas
From our hotel we travel along the Las Vegas Strip. It is a nearly seven kilometer long road lined with many familiar buildings. Here, for example, 15 of the world’s 25 largest hotels are gathered! We stop at perhaps the most famous chocolate factory in the USA, Ethel M Chocolate Factory, and pay a study visit here to see and taste the delicious pralines. Adjacent to the factory is also the Botanical Cactus Garden with lots of unique cacti that we see when we walk around the labyrinth of passages. Millions of tourists make a pilgrimage here every year. The afternoon is free for your own activities in Las Vegas. Feel free to take an evening walk along The Strip and marvel at the incredibly bursting neon billboards. Overnight in Las Vegas.

Day 8: Las Vegas – Death Valley – Mammoth Lakes
Upon departure from Las Vegas, we stop to photograph the famous welcome sign. After the luxurious glamor of the gaming city, we experience a very sharp contrast when we gradually arrive at Death Valley’s quiet and extreme surroundings. This ‘Valley of Death’ is a landslide in the Mojave Desert, and here is North America’s lowest point, 86 meters below sea level. In addition, a record temperature of 56.7 degrees has been measured here. We stop at Zabriskie Point, which, in addition to naming the 1970 film by Michelangelo Antonioni, is one of the world’s most desolate erosion landscapes. The famous ranch Furnace Creek is also visited before we cross the valley and reach the slopes of the Sierra Nevada. Finally we arrive at the famous winter sports resort Mammoth Lakes. Overnight in Mammoth Lakes.

Day 9: Mammoth Lakes – Yosemite National Park – Modesto
Today’s excursion first takes us to Tioga Pass, a mountain pass at 3,000 meters above sea level. Through this pass we enter the beautiful Yosemite National Park. We travel around the Yosemite Valley and are constantly amazed by the magnificent views and amazing rock formations that are visible everywhere. We get to admire El Capitan, Half Dome and the beautiful waterfalls Bridal Falls and Yosemite Falls. Yosemite has been a UNESCO World Heritage Site since 1984. The area itself was founded as early as 1890 and is the origin of the concept of national park. We spend the night in Modesto.

Day 11: Return from San Francisco The
morning for your own adventures. You can visit the famous prison island of Alcatraz (Sold as an option subject to availability. The excursion must be booked at least 30 days before departure). In the afternoon transfer to the airport for return. Meals are included on board the long-haul flight. 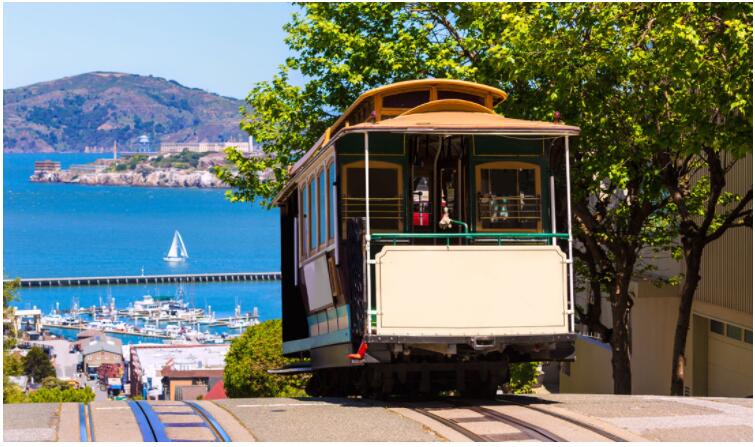